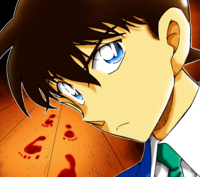 
Regarding the Maria theory: very interesting.

One more thing to note: the title of the first chapter she appeared in - File 548: 怪人二百面相. Wikipedia has the English translation as "The fiend with the 200 faces", but a quick dictionary search simply shows "mysterious person" as a possible way to interpret 怪人. (The official German volume has it as "devil"... to add drama, I guess?)

In the context of the chapter, of course, it referred to a note scribbled by the teacher Ms. Kobayashi, who pretended to have disappeared to give the kids some puzzle to solve and help the new students fit in.
Could it also be a subtle clue by Aoyama?

If the boss is Maria In disguise, then s/he is (yet another) character adept at changing their identity, in which case the description "mysterious person with 200 faces" would fit.

Other things:
-Maria lets out an Osakan accent by accident, and Ai remarks how a person will never lose an accent, only "take them off like jewelry" (German translation), and that she shouldn't be ashamed.
-Genta didn't even notice Maria until she got paired up with their group, even though she had been in the class for some time - showing that she doesn't stand out and can go by unnoticed (maybe reaching, since Ayumi did know who she was,
and Genta is generally a buffoon.

I've found some interesting symbolism to connect Maria to the archvillains in both Edogawa's and Conan's works. All this might be a coincidence but I think it's worth a look.
Spoiler:
1. Her Japanese name 東尾 マリア uses katakana. Normally this isn't that unusual since Maria is used as a Japanese name, but almost every recurring character in the series has a Kanji given name. The three main exceptions are Okino Yoko, Yamamura Misao and most importantly Edogawa Conan, which we know is a fake name. Think about it: if Maria is actually the boss, then the name Maria must be a fake name. Conan's fake name is a reference to Arthur Conan Doyle, so what about Maria? I can't find any famous Maria's with ties to crime fiction, but what about this idea: Could "Maria" be a reference to Moriarty? It's not exact of course, but a lot of Gosho's name references (Sera Masumi being a reference to Sayla Mass, etc) are also not exact.

Notice the リア being in common? The names are very similar.

I think Maria is a plausible way for Gosho to pick a feminine reference to Moriarty without being blatantly obvious?

2. I'm going to take your point of the fiend of 200 disguises even further. The title references this guy specifically: [Vous devez être inscrit et connecté pour voir ce lien]
It's definitely very interesting that Maria's first appearance is in a chapter referencing the most famous antagonist in Edogawa Ranpo's novels. Coupled with the potential Moriarty reference and there's definitely a clear way to link Maria to the most famous antagonist of both of Edogawa and Conan's (the two namesake of Edogawa Conan). At this point, we need to decipher her last name 東尾. Is this a reference to something as well?

3. I have to say it. She really, really looks like a female version of Conan. I mean her hair is different, but she has the same glasses + face. Like if both Maria and Conan shave their heads, they'd look identical.

4. If we really believe that Renya Karasuma is the true boss, I think it's actually very Gosho-ian that his disguise will be someone like Maria. In Vermouth's arc, remember that Gosho heavily teased us another American woman (Jodie) that looks a lot like Vermouth but then revealed that her disguise is a Japanese man, which is pretty much the complete opposite of her real appearance. Likewise, the complete opposite of Renya Karasuma's appearance (that's being portrayed as this really old dude) is a weak, little girl, which makes Maria a very shocking but plausible disguise.


Other random thoughts:
5. What's with the Kansai connection? We know she's from Kansai and there has to be some significance to that. I think right now, we need to see if the BO or Renya has any Kansai connection that can support this theory, so I don't think we know enough. The closest I got is that Edogawa Ranpo is from Kansai, so maybe it's a reference to that? Either way, definitely keep an eye out for potential BO Kansai connections.

6. What is 東尾 a reference to? If Maria is a reference to Moriarty, then what is her last name a reference too? We need to go through detective novel villains, especially Japanese ones, which I don't know if anyone here is well versed in.

7. Why does Haibara's test fail on her?

8. Who are her grandparents? Why does her grandpa look so freaking much like James Black? If we accept that Maria's the Boss, then whoever appeared in those pictures with her are of critical interest.

9. If she's actually the BO boss, what is her objective in 1006-1008? I think this is the theory's biggest weak point since she way too innocent there. Is this some kind of test for Conan because of the 1005 Shinichi appearance? She did he specifically invited Conan who didn't end up going. But if she's actually the boss then there has to be a very compelling reason why spent all that time recreating home videos and hiring 2 old people to pose as her grandparents.